All-4-One, Loren Allred and Skylar Stecker expressed their high regard for Filipino music and culture as they got to perform their own versions of Original Pilipino Music (OPM) in Filipino-American music director Troy Laureta’s latest album GILIW: A Troy Laureta OPM Collective Vol. 2.

Loren, Skylar andAll-4-One detailed in a virtual call what they love about the Philippines and the Filipino talents, as well as how they were learning the language. They were pretty much intimidated singing Filipino tracks at first but they were able to pull it off with the help of Troy. When Troy offered Loren to record Araw Gabi, Loren “got intimidated,” noting how Tagalog is “such a very complex language.” The former sent the lyrics to Loren and shared a video of Regine Velasquez-Alcasid performing Araw Gabi on Wish 107.5 Bus for reference.

“I did get to listen to the song. I really just practiced a lot but it was in the studio (where) Troy really helped me get in there and taught me the inflections and I was really, really committed to try to make it sound as good as possible,” said Loren.

She admitted that there was one line in the lyrics where she was tripping on it and it took some time to get that line right but she did it anyway. Nevertheless, she had fun doing it. “I just try to put my heart and soul there and try to kind of connect with the meaning of the song as much as I could,” she told The STAR, adding that she was also down to take the next challenge, which was to sing it live one day. 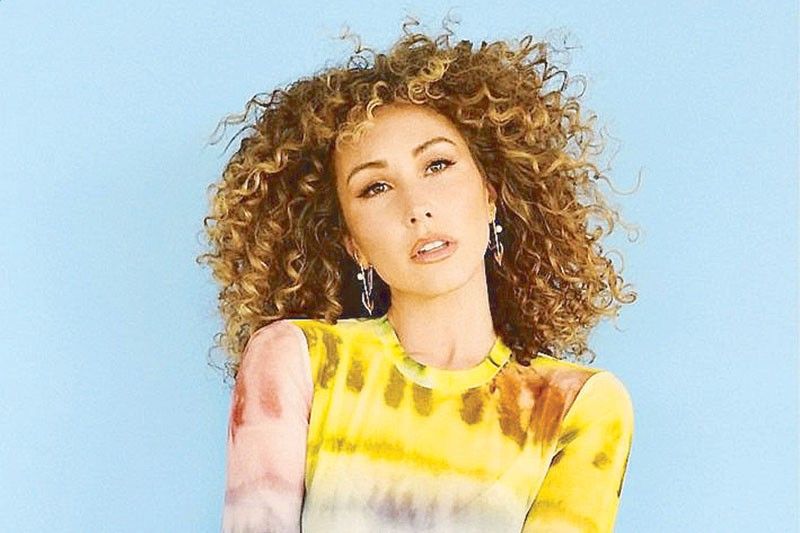 “I was surprised at the soulfulness of it,” commented Loren on Ryan Cayabyab’s Araw Gabi. “The song was just so jazzy, soulful, the lyrics are so sincere… It’s just kind of like an accumulation of a lot of musical genres in a perfect harmony. That was kind of my impression of the Filipino songs that at least Troy selected. (Or) maybe it’s just his good taste.”

Likewise, Loren particularly witnessed how Filipinos are naturally music lovers when she came to Manila a few years back. “I remember seeing karaoke machines in people’s backyards, people singing in the mall, people singing at 1 a.m. It’s just so full of music. Not only that, I think the Philippines has some of the greatest singers of all time, coming from that culture. And just to be able to even emulate some of these classic songs was just an honor to me.” Skylar Stecker is a Los Angeles- based singer- songwriter and actress.

She also cited Filipino’s warmth and hospitality. “Even when I was in the Philippines, the people that I met there I just felt like everyone treats each other like family. And I just didn’t wanna leave. There’s just a genuine quality, there’s also this humor. It’s hard to generalize but every Filipino person that I’ve met has just been really just warm and just funny. I just had a great time any time I’m hanging out with someone from the Philippines.”

Skylar agreed, “I love that even in these songs, (it) can have these big, simplistic melodies… And they (singers) feel every single word and it’s very intentional… I feel like the music standard is set so high and it’s really refreshing.”

Loren and Skylar further lauded Troy’s ingenuity and “undeniable and incredible talent” as a music director.

Being able to sing in a different language was also a challenge for Grammy-award winning band All-4-One, composed of Jamie Jones, Delious Kennedy, Alfred Nevarez and Tony Borowiak, but they did it right in the end.

“Even though I speak Spanish, some of the words kind of, like, sound the same. But not really (laughs). And yes, I really struggled and there was a tongue twister, like Loren was saying. That was pretty complicated but we got it. Thanks to Troy, he is an amazing producer,” said Alfred.

Reacting to Loren’s earlier remark about the soulfulness of Filipino music, Delious wasn’t surprised at all. “I’m one of those YouTubers that watch a video and then spend an hour watching other side of videos. I’m sort of seeing all of Jake’s (Zyrus) stuff when he was younger. Then I watched Regine on Specials (performances). And I have seen all those singers killing it. So, this was never a surprise to me that the song would be as soulful.”

The group praised their “amazing Filipino fans since the early ‘90s,” too. Jamie recalled their visit to the Philippines sometime ago, “To hear in person so many amazing singers and all of us looking at each other, and like ‘Yo, they’re dope over here.’ When Troy said to us, ‘Hey, I have a song,’ I knew it was gonna have some kind of beautiful, melodic (tune) because that was what we’re used to hearing from them.”

Delious added, “When we’re in the Philippines, one of the things that I like to do whatever hotel we’re staying in, (is) I always, at the end of the night, when we’re finished playing, (we) go down to the lounge where the singers are…I just get a drink, relax down here and listen to the singers because I know it’s gonna be a good singing.”

The “only quality that they don’t understand” about the Filipinos is the ability to eat balut. “If you give me some lumpia and some pancit, we are good to go. We were not so brave when it came to balut (laughs). Tony actually, he is not here, he tried it. That one time in band camp, he had it and never again did he try it (after that),” quipped Jamie.

On the local front, Boy Abunda makes a surprising appearance in the album via the Interlude: Pag-ibig; Jona sings her version of Someone To Love Me; Kaibigan intro by former The Voice Kids Philippines Season 4 contestant Adah; Troy’s sister, Cheesa, on Kaba; Regine and Nicole Scherzinger on Nandito Ako; and Jake Zyrus on Maghintay Ka Lamang and album’s Outro: Kung Kita’y Kapiling.