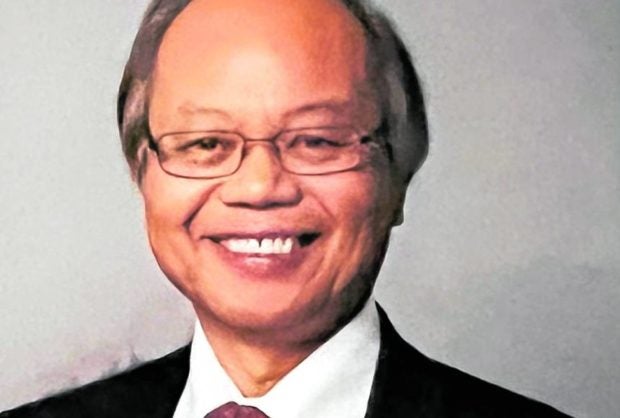 SORELY MISSED: The passing of Dr. Horatio Cabasares in 2020 left “a very difficult void” in the American town where he served for nearly 40 years, according to the mayor. —CONTRIBUTED PHOTO

PERRY, Georgia — When Dr. Horatio Cabasares succumbed to the COVID-19 virus that was killing thousands of Americans during the Christmas holidays in 2020, his death was immediately felt by this small town where he was its only surgeon for 40 years.

“Our entire community is going to suffer a very difficult void with Cabby not being in it,” Perry Mayor Randall Walker told the Houston Home Journal newspaper on Dec. 16, 2020, the day the doctor died.

“Cabby” is the famous nickname of the Filipino doctor who immigrated to the United States in 1973, settled in Georgia and built a successful medical practice as a general surgeon at the local Perry Hospital where he performed thousands of surgeries, including lifesaving operations.

Sadly, Cabasares died while still attached to a ventilator, missing the mass vaccination rollout in the United States by a few days, becoming a grim casualty among doctors who were felled by the virus around the world.

Numerous tributes on social media poured in and a long train of cars lined for hours outside the Watson-Hunt Funeral Homes here for days, showing how well-loved this Filipino American country doctor was to his thousands of patients in this small manufacturing town in the heart of Georgia.

“He saved my life when I was on my deathbed,” said Mary Hill, a cancer patient who owed Cabasares a new lease on life.

The death of Cabasares a few days before Christmas was a devastating tragedy to his family. His death, too, magnified the huge toll the pandemic was taking on Filipino American families of doctors and nurses fighting on the front line.

“It was so sudden and so unexpected. I still can’t believe he is gone,” said Lorna Cabasares, the doctor’s 70-year-old widow—a registered nurse who is spending her second winter without the warmth of her husband by her side.

For rich and poor

Cabasares endeared himself to this town of 19,000 people because he served both the rich and poor alike, without regard to their social status, according to his children.

“One of his patients was Sam Nunn!” said the doctor’s 49-year-old son Hubert, referring to the former US senator from Georgia and one of America’s most powerful politicians when he chaired the armed services committee in the 1990s.

“My dad anonymously paid for the lifesaving surgery of a woman who could not afford the procedure,” said Leigh Cabasares Wolk, 42, the doctor’s only daughter.

For many immigrants, the life of Cabasares also personified the so-called American Dream. 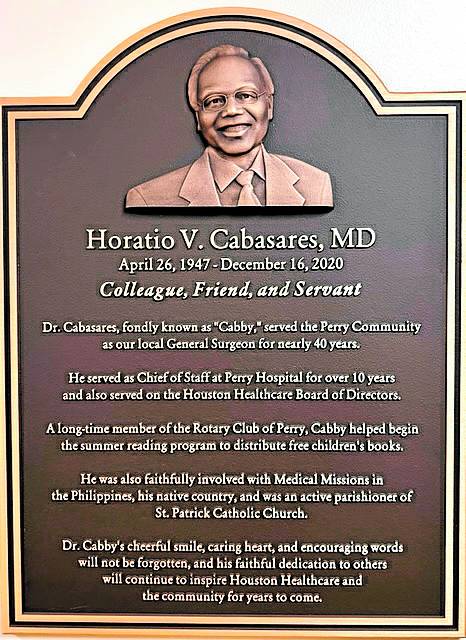 TRIBUTE TO ‘CABBY’ A bronze plaque honors Covid victim
Dr. Horatio Cabasares at the Georgia hospital where he is remembered as a hero for saving countless lives. —CONTRIBUTED PHOTO

Born in a small village in Cabucgayan, Biliran province, in 1947, Cabasares got his medical degree from the Cebu Institute of Medicine in 1971 on a scholarship provided by his father’s military service with the US Army during World War II and his mother Maria’s salary as an elementary school teacher.

After he married his sweetheart Lorna Cabahug in Cebu on Sept. 30. 1972, his father Ariston advised him to go abroad.

“You should go to America,” his father counseled.

He was 25 then and President Ferdinand Marcos declared martial law in the Philippines just a week earlier. The dictator and his henchmen persecuted doctors who were helping the poor, some of them ended up being tortured and killed like Dr. Juan Escandor and Dr. Bobby de la Paz.

This climate of growing repression under Marcos compelled Cabasares and many other young and talented medical professionals to leave the country in droves, becoming the faces of the Filipino diaspora in the early 1970s.

Derided by some politicians as “sellouts” for causing the “brain drain” in the Philippines, this generation of doctors and nurses still returned home for herculean relief work after major disasters hit the country, proving their worth to their motherland.

As a top official of Rotary International, Cabasares joined several medical missions in the Philippines, performing free surgeries on poor Filipinos around the archipelago and donating vital medical equipment to hospitals after the catastrophic “Yolanda” (international name: Haiyan) supertyphoon in 2013.

A diminutive man with a megawatt smile, Cabasares conquered prejudice and earned the respect of this small town by becoming chief of staff and later director of the board of Perry Hospital where he had worked since 1980.

A lifelong bibliophile, Cabasares is also remembered for his reading program for young students, donating 8,000 books when he was president of the local Rotary Club.

According to his younger son, Hanz Cabasares, 47, Doctor Cabby once wishfully said: “I wonder if they will give me a plaque when I die.”

On the eve of his first death anniversary last month, artists installed a huge bronze plaque of him on the wall of Perry Hospital where the late doctor from the Philippines built a remarkable career of saving lives.